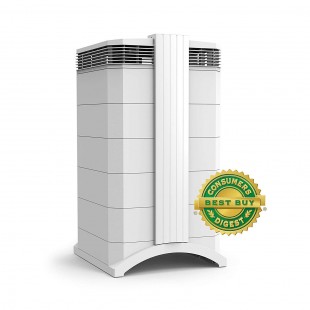 Reasons to buy IQAir HealthPro Plus:

Uses a HyperHEPA Filtration system which is proven and certified to trap and remove almost all airborne pollutants (ultrafine) of size 0.003 microns in size at 99.97% efficiency

Features: (1) Time & Day Settings - set current time and day settings, (2) Automatic Timer ''Day-of-the-Week-Timer'' - deactivate Timer ON period on particular days of the week, (3) Timer ON / OFF (4) Speed Selection - it allows you to set fan speed for the Timer ON period.

Room size coverage is 1125 Sq.ft and It Delivers up to 780 cfm while at the lowest setting which consumes 27 watts. But when set at the highest speed - it will consume 215 watts.

HyperHEPA filtration technology is tailored for superior airborne particle removal. It is the only air purifier that removes ultrafine particles by 90%

Since it can trap and eliminate pollutants as small as 0.003 micron in size - it can easily capture and remove dust mites

HyperHEPA filtration technology can capture and remove 99.97% of pet dander. So if you leave with pets, worry no more about Pet Dander

GETS RID OF POLLEN

Is good at eliminating pollen before it enters the air you breathe. So if you have Asthma – this is the right air purifier for you.

Reacts very well to smoke of all types; It could be smoke from the kitchen, bush fire or tobacco smoke

Yes, it does remove mold effectively.

Traps and removes allergens by 99.97%. The HyperHEPA filter system is tailored to eliminate all sorts of allergens including ultra-fine particles that are smaller than 0.1 microns

Has an average of 7% less sound across various fan speeds. It will operate quietly without reducing on its filter life and performance

You can wash or vacuum them to remove dust. The PreMax Pre-Filter traps large particles – so cleaning it once a week maintains the performance of the unit.

Air filters are well positioned at the back of the purifier making it very easy to remove and replace them.

It monitors and purifies air every after a few minutes. That is why it is a medical grade air purifier.

It uses only 27 watts at lowest speed and 215 watt max at highest speed - thus save you lots of power.

This is number one choice for allergy sufferers. It has received recognition for its ability to reduce allergens and other air contaminants

You can easily adjust fan speed, program the unit and set schedules with a remote control.

FILTER LIFE - BASED ON USE

It does not emit off ozone gases and harmful chemicals to the environment – this makes it safe for every home.

WAS THIS REVIEW HELPFUL TO YOU? IF YES, PLEASE SHARE IT WITH A FRIEND.

Thank you for your feedback!